Angela is originally from Hull and has achieved a great deal in her life. She had moved south to London through her own volition after she’d graduated to become a teacher of art to secondary school kids. She made a new circle of friends very quickly and as part of evolving her new life, settled into a flat a short bus ride from her new post. In a relatively short space of time, she had met and married her now husband.

Pretty good going I think we can all agree.

The one thing that had thus far eluded her was a healthy lifestyle. Like many of us, Angela was vulnerable to sweet, fatty, rich food often accompanied by a glass of wine…or two. 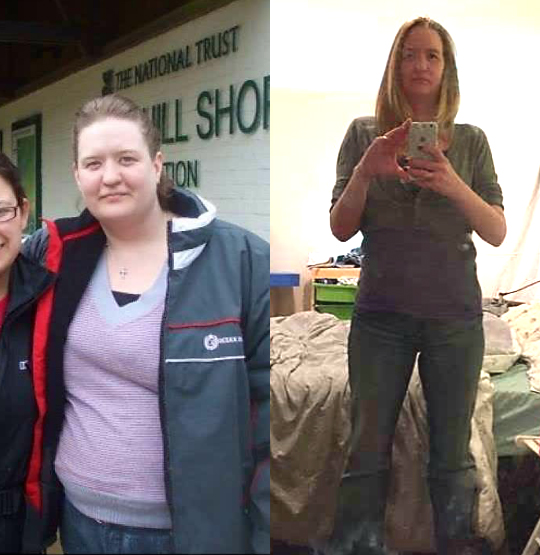 I think that I was a bit caught up in the “work hard, play hard” culture. I was kind of celebrating my happiness. But things soon changed. As soon as it became apparent that I was pregnant with my first child and obviously my focus changed.

The pregnancy went well and Angela and her little family went about adjusting to their new situation.

As time went on she became aware that her weight was becoming a bit of a problem for her. She wasn’t getting any smaller and in fact quite the opposite.

“I started to realise that I was less happy as time went on” she remembered. “My weight was affecting my idea about myself.”

Angela quickly signed up at the local gym and started to confront the issue head-on.

“I was fortunate enough to be in a position where I could afford a personal trainer which was helpful but I still had periods where I would relapse and binge for a week before getting back on the straight and narrow. It wasn’t until I made the decision to seek the help of a hypnotherapist that life really changed for me. It became so much easier to keep the weight off because my belief around healthy eating and working out had changed completely.

Before hypnotherapy, I was kind of fighting myself. Many times I felt like staying at home rather than working out because it felt like hard work and so I was rewarding myself with a ‘weekend off’ which turned into a whole week off.

It was one extreme or another for me. After the very first session with my hypnotherapist, my belief around the whole thing changed.

Eating the right food and exercising was now part of my life in a way that felt completely natural and normal to me. It’s just part of who I am now and I always advise people with similar issues to the one I remember to invest in themselves and seek help from a good hypnotherapist.

Personal trainers are very helpful but hypnotherapy helps you to change your belief about yourself. It gives you confidence in your own power”.

Angela lost 6 stone 10 lbs and is the hero of this story. Just look at the before and after pictures!
If you need help with this issue or any other, give us a call.

Be The hero of your story and make that change!

IF YOU WANT HELP…